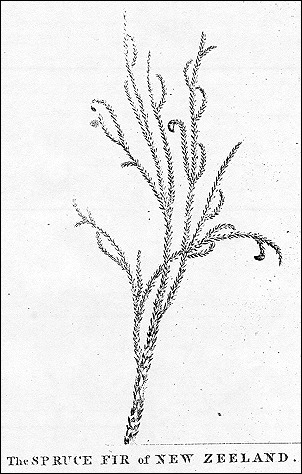 Having procured a sufficient supply of wood and water, on the 6th of February, 1770, the wind being northerly, we left Charlotte Sound, sailing along the coast to the eastward: but it falling calm towards evening, we anchored about three quarters of a mile from the Hippa in ten fathoms of water, and sent our boats a-fishing.

The next morning [2/7] we made sail, but the tide son after carried us rapidly towards a cluster of rocks, projecting from an island at a small distance, and the wind failing, our situation became justly alarming. At this time one of the principal officers proposed endeavouring to cross the tide, and gain a passage between two islands and this gentleman's station made his proposal, though impracticable, of so much importance at this critical season, that the captain, who was about to give orders of a different kind, became irresolute; and during the dispute which this contrariety of opinion occasioned, we were carried so near the rocks that our preservation appeared almost impossible; and at this critical juncture we could only let go our best bower, which we instantly did, with all sail standing, in seventy-five fathom; and after veering out a hundred and sixty fathoms of cable, we found the ship brought up by her anchor, to our great joy. But had this expedient failed, she must have been irrecoverably lost, and all her crew left either to build a vessel to transport themselves to the East-Indies; or , if that should be impracticable, to pass their lives in New Zealand, if they should be able to defend themselves from the jaws of the cannibals.

It ought to be remarked, that Tasman, when he visited Murderers Bay, imagined that there must be a streight running through the country to the opposite shore; and this he did from observing that the flood-tide ran in strong from S.E. and therefore while lying in Charlotte Sound, we had ascended the top of a neighbouring mountain, to see if we could observe the appearance of a streight or passage, which we there discovered, and upon enquiring of the natives concerning it, they told us it was navigable to the other side of the country; and that the southern division of New Zealand might be sailed round in one of their canoes in four days time. This information determined us to make the experiment; and accordingly we stood toward the streight, which we found, and passed the next day, near the middle of the channel; and, though the land was visible on each side, yet, to prevent the possibility of a deception, after passing the streight, we stood to the northward until we made Cape Turnagain, which we did on Friday noon: and having thus determined the reality of the streight, we altered our course to the southward, resolving to sail round the other division of New Zealand. We continued our course, expecting to find the land incline to the westward, but were disappointed in our expectation: indeed we observed something like the appearance of a passage some leagues south from the streights, but the whole company were divided in opinion about the matter; thought from the reports of the Indians, it is not improbable that there was a passage navigable for their canoes, if not for vessels of burthen.

[Editor's Note: The strait Cook and crew discover and traverse the strait in this excert is now called "Cook's Strait". Cook first heard about it from Abel Tasman's voyage, which preceded Cook.]

The Endeavour takes a long time to circumnavigate the South Island

We persisted in our design of discovering whether the southern division of New Zealand was an island or continent, but were frequently opposed in our course by heavy winds from the south, in one of which, on the 26th of February, our foresail was irreparably torn in pieces, and our main topsail divided asunder; and the gale continuing violent for several days after compelled to lie to. The tempestuous season advancing fast, and the air being very cold, we began to despair of a southern passage, having been more than a month employed on a discovery which might have been completed with favourable winds in a few days.

On the 9th of March, at four in the morning, after having complained of the want of wind all night, we were surprised to find a ledge of rocks about half a mile forwards, and extending a-cross both our bows. We had ten abundant reason to rejoice at the providential calm the preceding night, as a few minutes favourable wind would have occasioned our certain destruction. These rocks lie S.E. from the southern extreme of New Zealand, and at the distance of twenty miles.

On the 10th we doubled the Southern Cape in latitude 47°39'S. and longitude 191°35'W. and again stood to the northward on the west-side, with a favourable wind; intending to return to Charlotte Sound, and replenish our stores of wood and water, if no convenient place was discovered nearer. The land on this part of the coast afforded a most dreary prospect, and consisted of very high mountains covered with snow, and falling by the steepest descent immediately into the sea, without the smallest beach or landing--place. Nor could we any where discover the smallest appearance of a human inhabitant.

On Monday the 26th of March, in latitude 40°32', being thirty-three miles north from Charlotte Sound, we stood into a deep bay or sound, having islands on both sides, and thirty-six fathom of water at one mile distance from shore; and steering in S. by W. we anchored in Admiralty Bay on the left side in eleven fathom muddy ground; and mooring with the stream-anchor, began to supply our stock of wood and water. We found this place entirely uninhabited, and but badly sheltered from easterly winds. But it afforded plenty of wood and water, as well as of fish, of which we caught more than sufficient for our consumption with hooks. We discovered an old house by the side of a mountain, at a little distance from the bay, and the wreck of an old canoe lying in a cove contiguous to it. We had now passed near six months on the coast of New Zealand, had surveyed it on every side, and, which was not before known, had discovered it to be an island near three hundred leagues in length, and inhabited by cannibals, habituated to the carnage of war from infancy, and of all mankind the most fearless and insensible of dangers.

On the 31st of March we left Admiralty Bay, and sailed south-westerly, towards New Holland, taking our departure from a point which we named Cape Farewell. By instructions, opened here, we were directed to return home by Cape Hormor, and to stop at the East Indies, if necessary.