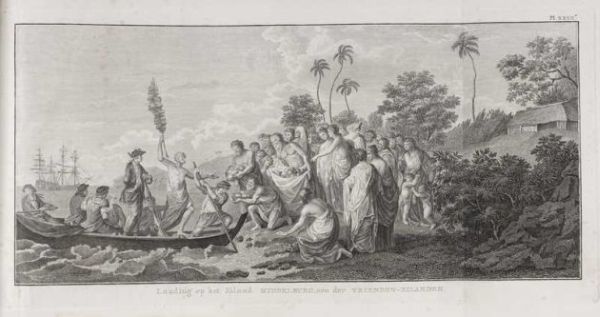 Captain Cook sailed every ocean and was perhaps the first British explorer to set foot on each of the continents of Asia, Africa, Australia, and North and South America.  But Cook is most famous for his three voyages to the Pacific Ocean, where during 12 years of exploration, he and his crew discovered a wealth of new places, cultures and scientific phenomena.  Read below for a brief summary of each voyage.

The Royal Society engaged Cook to travel to the Pacific Ocean to record the Transit of Venus, the eclipse of the sun by Venus.  The expedition sailed from England, rounded Cape Horn and continued to Tahiti, where the observations were made of the eclipse.

The expedition proceeded to search the south Pacific for the postulated rich southern continent. Cook later mapped the entire New Zealand coastline. (You may visit the Young Navigators section of this exhibit to read his diary excerpts from this part of the voyage.)

Cook then sailed westward where his crew became the first Europeans to encounter the east coast of Australia.  The first landfall was at a place that Cook named Botany Bay, near modern-day Sydney, after the botanical specimens collected there. 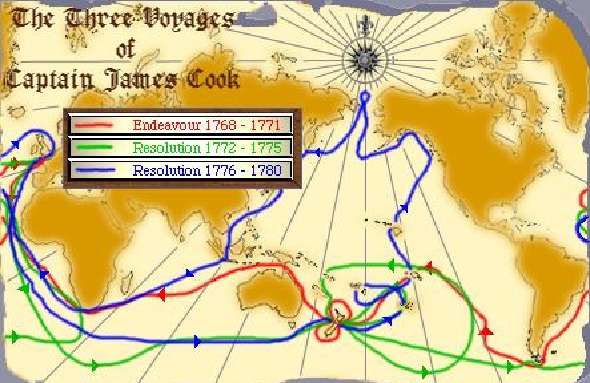 See http://www.winthrop.dk/map.html for information about this image

Cook’s second voyage was planned to settle the question of the existence of a vast, unknown, southern continent.  Cook crossed the Antarctic Circle and sailed further south than anyone had gone before.  Of the search for the unknown continent, Cook wrote: “I had now made the circuit of the Southern Ocean in a high latitude, and traversed it in such a manner as to leave not the least room for the possibility of there being a continent, unless near the pole, and out of the reach of navigation.”  Cook came within 75 miles of the coast of Antarctica.

Cook commanded the Resolution on this voyage, while Tobias Furneaux commanded its companion ship, the Adventure.  The expedition circumnavigated the globe at a very high southern latitude, becoming one of the first to cross the Antarctic Circle. In the Antarctic fog, the Resolution and the Adventure became separated. Furneaux made his way to New Zealand, where he lost some of his men during an encounter with Maori, while Cook continued to explore the Antarctic. 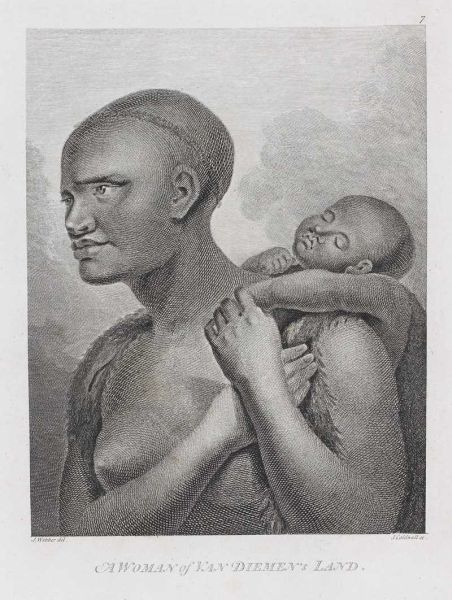 On his last voyage Cook again commanded the Resolution, while Charles Clerke commanded the Discovery. The main purpose of the voyage was an attempt to discover the famed Northwest Passage.  After visiting Tahiti, Cook became the first European to visit Hawaii. After landfall in January 1778 at Kauai, Cook named the archipelago the Sandwich Islands.  Cook then sailed northeast to explore the west coast of North America, making landfall on the Oregon coast.  After spending nearly a month in Nootka Sound on Vancouver Island, Cook explored and mapped the coast all the way to the Bering Strait, before returning to Hawaii in 1779, where he met an untimely death.

Crew members soon learned that accounts of their experiences were in demand by the reading public, and many of them kept journals during Cook’s final voyage.  One such crew member was William Ellis, the surgeon’s second mate aboard the Resolution,  who along with artist John Webber, documented his experiences with drawings and watercolors, as well as text.