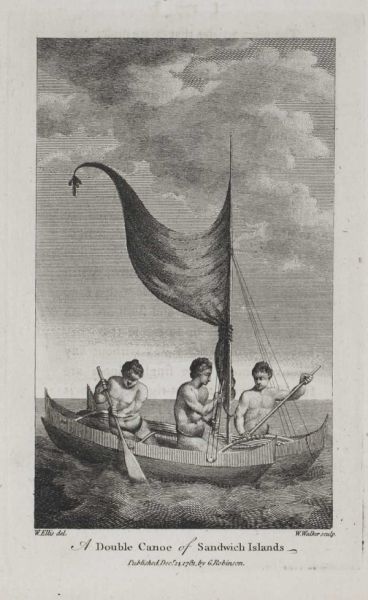 A Double Canoe of Sandwich Islands. By W. Ellis. From: W. Ellis.  An Authentic Narrative of a Voyage Performed by Captain Cook and Captain Clerke.  London: for G. Robinson, 1782.

Cook's 12 years of exploring the Pacific Ocean greatly expanded European knowledge of the area.  Several islands were encountered for the first time, and Cook’s more accurate navigational charting of the Pacific was a major achievement.

Cook made his voyages at a time of rapid progress in astronomical navigation and the making of astronomical instruments.  For centuries navigators theorized that any point on the earth’s surface could be plotted by naming its coordinates of latitude and longitude, but not until Cook’s time did the coordinate system become a practical reality.  Cook mastered and put into practice the latest innovations and techniques in navigation.

Two years before Cook’s first voyage, the Nautical Almanac was published with tables that could be used to determine a ship’s longitude, its position to the east or west of the Greenwich meridian.  On the first voyage Cook and his astronomer, Charles Green, made observations of the sun and moon, using the tables in the Nautical Almanac, Hadley’s reflecting quadrants, the newly devised sextant, and a pocket watch, and were able to accurately plot their latitude and longitude.

During the second voyage Cook tested the Harrison-Kendall clock and showed it to be an accurate means of determining longitude, even in the coldest weather.