Excerpts from The First Journal, 1768: Before New Zealand 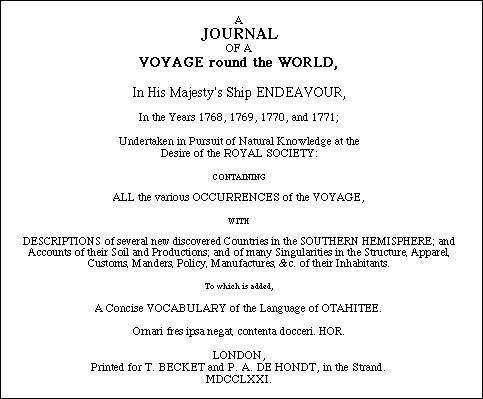 The first pages of the journal - Cook's Assignment

In the beginning of the year 1768, the British ambassador at Madrid applied to the court of Spain for the grant of a passport on a ship designed for California, to observe the transit of Venus, which was promised, with a provision that the astronomer should be a member of the Romish church, and an Italian gentleman was consequently engaged for the undertaking; but the passport when demanded was refused by the Spanish ministry, who alledged that it was repugnant to the policy of government to admit foreigners into their American ports, unless driven there by necessity;' but especially those who by their profession would be fitted to make such observations as might facilitate the approaches and descents of their enemies at any future war with Great Britain.

It was then determined to dispatch the Italian gentleman to Hudson's Bay, and a ship of four hundred tons burthen was purchased for the voyage by order of the government.

The ship, the crew, the equipment and the beginning of the first voyage

This ship was named the Endeavour, and, according to the original plan, was to have been navigated by a master, a second master, a mate, two midship-men, and thirty seamen, who were engaged for the service, and orders were at the same time issued from the navy-office to equip her for the undertaking; and early in the month of May warrants were granted to the first and second masters, but recalled the following day, the plan of her voyage having been altered. But on the 27th of the same month the ship was again put in commission, and her complement augmented to seventy men, an application was likewise made for a number of marines, but without success.

On the 21st of July she fell down to Greenwich, and the next morning to the Galleons, where we received on board six guns, being four-pounders, together with twelve swivels, and gunners' stores, &c. On the evening of the 30th we anchored at Gravesend, and the next morning proceeded towards the Downs, where we arrived on the 3d of August, and on the same day sailed for Plymouth, where we came to anchor on the 14th and were ordered to receive on board twelve marines, and three additional seamen; which, with Mr. Green the observer, and his servant, together with Mr. Banks and Dr. Solander, and their attendants, who were considered as supernumeraries, encreased our number to ninety-six souls. We likewise received four additional carriage guns, and, having made several beneficial alterations, were on the 20th of the same month ready for sea, but the wind blowing fresh at S. W. we were detained until the 25th, when it changing to N.N.W. we put to sea at four o'clock in the afternoon. The wind however soon became and continued south westerly until the 2d of September, when it changed to the northward; and at half past five on the morning we discovered the land, bearing S.S.W. and at ten we distinguished Cape Ortugal, bearing S.E. by E. half E. and distant seven leagues. The winds were fresh but variable until the 4th, when at eight o'clock, A.M. we discovered Cape Finisterere, bearing S.W. by S. at ten leagues distance.

One of Capt. Cook's most important contributions to long sea voyages was to find a way to treat scurvy, the dread disease of early sailors. In Cook's entry for Oct. 21, 1768, he wrote: "At this time we began to brew sweet wort for those who were affected with the scurvy." The sailors had been at sea for a month, having departed Madeira on Sept. 19. A footnote explains the sweet wort treatment: "This remedy was first proposed by Dr. Mackbride, who by many experiments found it fitted to supply the want of fresh vegetables, by generating large quantities of fixed air, which is possessed of the most antiscorbutic and antiseptic qualities."]

The 25th [of January, 1769] we saw Le Maire's Cape Horn at S.W. by S. five leagues distant: it appears to be a low point, and is the S.E. extremity of several islands, called by the French Islaes d'Hermitage; near it are several pointed ragged rocks. This cape is in latitude 55° 48' S. and longitude 67° 40' W. the variation 21° 16' E. the dipping-needle stood at 64° 30'. We sounded in fifty-five fathoms, round stones and broken shells at bottom. We discovered a point of land northward from Cape Horn, which we concluded to be the island mentioned by Le Maire, and called Barnevelts or Diego Ramiries. We had about this time but little night; a favourable circumstance in the squally disagreeable weather which then prevailed.

We had likewise planted many European seeds, of which none, except mustard, cresses, and melons, were found to vegetate: and having furnished ourselves with sufficient specimens of the cloth, implements, and utensils of Otahitee, together with sufficient supplies of wood and water, on the 13th of July, 1769, we sailed from George's Island, having on board an Indian named Tobia, who had formerly been high-priest of Otahitee, but being disgusted with the present regent, he voluntarily embarked on our voyage, bringing with him an Indian lad named Tiato, as an attendant.