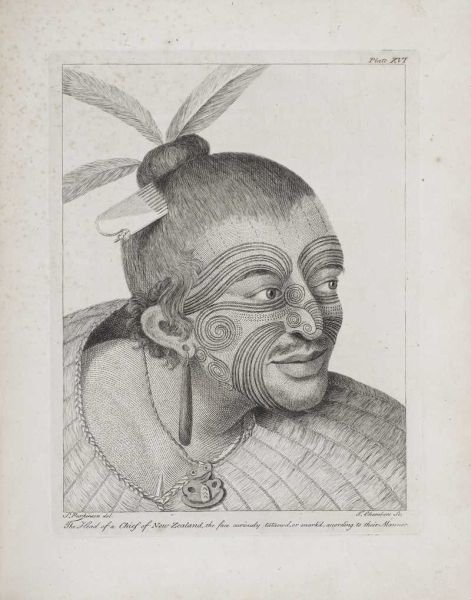 Head of a Chief of New Zealand.  By S. Parkinson. From S. Parkinson, A Journal of a Voyage to the South Seas in His Majesty’s Ship, the Endeavour.  London: printed for Stanfield Parkinson, 1773.

Cook and his crews experienced encounters with the native peoples of the Pacific Ocean which led to mutual respect and trade, as well as misunderstanding and violence.  This mutual discovery had a profound impact on Europeans and native peoples, but the advantages in the exchange were heaped on the side of the Europeans with their greater technological sophistication.

Cook’s voyages heralded a series of destructive and modernizing changes to native cultures.  But the opening of the Pacific also brought significant changes to Europeans, expanding their knowledge of the world, replacing geographical myths with fact and introducing them to cultures much different from their own.

Europeans’ interest in the distant corners of the world did not abate with the end of Cook’s voyages.  Books and plays about the voyages remained popular, and thousands of people viewed exhibitions of artifacts from the voyages.

More fundamentally, knowledge of the Pacific challenged established views about the nature of humanity.  Pacific peoples demonstrated the full range of the human condition, a vision both disturbing and liberating.