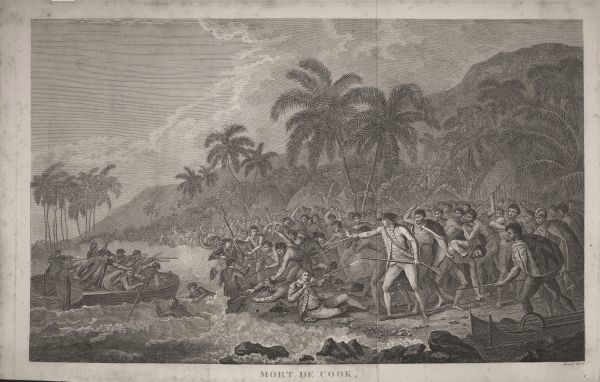 Cook’s death culminated a series of accidents and misjudgments during the third voyage.  In mid-January 1779 the Resolution and Discovery anchored in Kealakekua Bay, Hawaii.  For the next fortnight Cook and his crew received generous hospitality from the islanders, who apparently imagined Cook to be an incarnation of one of their gods, Lono.

Cook took his ships out of the bay, intending to continue the search for a northwest passage, but he was forced to return after the Resolution was badly damaged in a gale.  This time Cook’s reception among the natives was not so friendly.  His return conflicted with established myths concerning the place of Lono in the Hawaiians’ religious calendar.  Tensions rose between the Europeans and Hawaiians after Cook ordered a blockade of the bay to force the natives to return a small boat which had been taken.  Cook was forced to retreat to the beach where he and four marines were killed.

The accounts of his death are disputed but Cook was eulogized by the British in paintings, poetry, and plays as a tragic hero and as the humane personification of the Enlightenment.  Whether these representations were fair or not, the official narrative of Cook’s life served as an early example of the exercise of power and violence in the name of peace and liberal values.