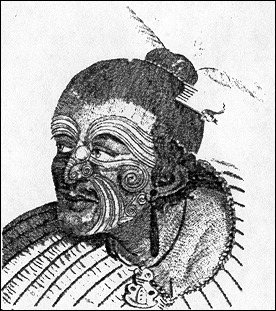 It deserves to be remarked, that the people of New Zealand spoke the language of Otahitee with but very little difference, but so much as is found between many counties in England; a circumstance of the most extraordinary kind, and which must necessarily lead us to conclude, that one of these places was originally peopled from the other, thought they are at near two thousand miles distance, and nothing but ocean intervenes, which we should hardly believe they could navigate so far in canoes, the only vessels that they appear to have ever possessed; for as there is no natural relation between sounds and the ideas they are made to convey by speaking; so it must be evident, that neither the suggestions of reason or of nature, would ever lead two distinct, separate people, having no communication with each other, to affix the same meaning to the same words, and employ them as the medium of communication. It must, therefore, be inferred, that the inhabitants of one of these islands originally migrated from the other, though, upon comparing the manners, dress, arms, *c. of the people of Otahitee with those of New Zealand, as far as they have fallen under our observation, we shall find them disagree in several important particulars, but in several others they have an apparent analogy.

The New Zealanders . . . mark their bodies in spiral circles, buy introducing blue paint under the skin after it has been punctured according to the manner of Otahitee; they have likewise beards and long hair, which they tie at the top of the head, like the natives of Otahitee. They differ, however, in complection, being much browner than those of George's Island, though both seem to agree in their propensities to knavery; but in martial courage the New Zealanders are much superior; and indeed it is impossible to see, without astonishment, the degree of madness to which they will elevate themselves even in their harangues, that are preparatory to a feigned battle.

Their cloaths are made from the fibres of a species of silk grass, wove by knotting or tying the woof together in lines, commonly about a quarter of an inch different; and are curiously embroidered at the corners and edges with black and brown figures, and fringed with dogs hair; and when worn are tied over the shoulders with strings, and depend below the loins. They likewise wear belts made from a kind of strong grass braided together.

Like the people of George's Island, they never boil their meat, but always bake it in subterraneous ovens. Their weapons are the Patty Petow, which is made either of wood, bone or stone and consists of a handle joined to a broad flat two edged blade. The battle axe, which is made from a species of very hard, heavy wood, and has a very long handle. They have likewise wooden spears, with hair tassels near their points, which are sometimes wood, and at others the spear of the sting ray-fish. It is remarkable, however, that, notwithstanding the natives of Otahitee use bows and arrows with great dexterity, those of New Zealand were wholly unacquainted with them, until we first taught them their use; a circumstance which renders it probable that the migration was from New Zealand to George's Island, and that the inhabitants of the latter discovered the use of bows by some accident, after their separation; as it cannot be supposed the New Zealanders would have lost so beneficial an acquisition, if they had ever been acquainted with it. Their trumpets are near two feet in length, having a large broad flat belly or concavity, with a large hole about the middle; these produce a shrill hoarse sound. They commonly wear a small wooden whistle tied about the neck, which is open at both ends, and has two other perforations or holes. Their combs are made from bone or wood, and have very long coarse teeth. Many of them wear an image carved from a greenish stone, made into an odd half human figure, which is tied about the neck. They likewise wear small images of wood or stone, and sometimes the teeth of a deceased relation, which depend from their ears. Their axes and fish-hooks are like those of Otahitee.