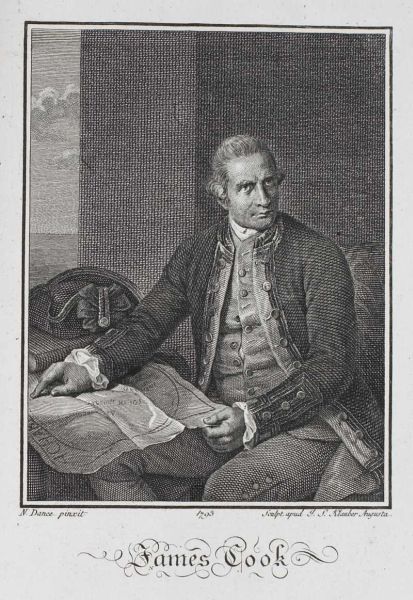 Cook was born in 1728, the son of an agricultural laborer, and he received a basic education at a village school in Yorkshire.  At eighteen he became an apprentice working the coastal trade in coal and he served at sea in this position for nine years before transferring to the Royal Navy.  He saw military action at the start of the Seven Years' War and helped to survey the Saint Lawrence River during the campaign to capture Quebec in 1759.

After the war he commanded a small schooner tasked with surveying the Newfoundland coast.  He made careful measurements of a solar eclipse from which he calculated his observational position, and published his findings in the Royal Society’s Philosophical Transactions for 1767.  The reputation Cook established from that paper, coupled with his charts of Newfoundland, were probably the two most important factors leading him to be chosen to command the Endeavour on the first of his three voyages to the Pacific Ocean.