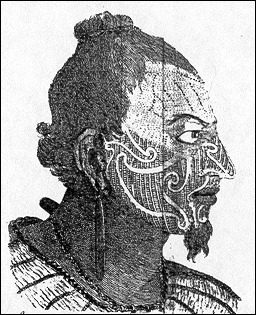 The Endeavour founders again, and a long visit with a native village to repair the ship

On Friday the 12th of January, 1770, being in latitude 38°10', we discovered a remarkable peak nearly equal in height to that of Teneriffe, which was covered at its summit with snow. On Monday the 15th in the morning we discovered a bay, about eleven leagues to the S.S.W. and sailed towards it; but a little after, being two miles from the shore, we were nearly driven upon a ledge of sunken rocks, which extend about a mile and an half from the land: but it being almost calm we hoisted out our boats, and towed the ship without danger. We then sent the pinnace to examine a small cove before us, but soon after recalled her on seeing the natives launch and arm their canoes. In sailing towards the bay, we observed an Indian town, where the inhabitants, by waving their hands almost incessantly, seemed to invite us to land. In passing the point of the bay we saw an armed sentinel on duty, who was twice afterwards relieved. About noon we anchored, and were soon after visited by many of the natives in their canoes; but none of them would venture on board, except an old man, who was apparently of some distinction among them; but in attempting to climb up the ship's side, he was several times forcibly with-held by his countrymen. At length, however, he came on board, and Tobia joining noses with him according to the custom of New Zealand, their apprehensions were thereby removed, and beginning a loud laugh they immediately came up the side without the least constraint of timidity. As we passed the town an old Indian, in a singular kind of habit, came down to the water-side, attended by several of his countrymen, and there performed some mysterious rites, with a matt and feathers, &c.

Cook loses his temper and finds human bones in a basket

Tuesday the 16th, as we prepared to careen our ship, several Indians in canoes came along side with fish for sale, which they offered to the deputy-purser; but on his giving them the stipulated price, they suddenly withdrew their fish and would have killed him with their hepatoos, had he not precipitately escaped. This insidious attempt being represented to captain Cooke, he seized a fowling-piece, ready loaded with duck shot, and fired at the aggressor, who being almost directly under him, received the charge in his knee, which was thereby shattered in pieces, a few scattering shot likewise passed through his great tow. His wounds producing a plentiful hemorrhage, he bathed them in salt water, and the pain being acute, he angrily threw the fish which he had sold, and for which he had been paid, into the sea. The Indians who were in the other canoes, did not appear surprized either at the report of the gun or the wounds it had made, thought they all paddled around and examined them: nor did the wounded Indian retire, but wrapping himself up in mats he continued about the ship several hours. A little before this transaction, two of these Indians being prevented from coming on board by the master, who thought there were more on the deck than could be prudently admitted, they immediately drew their spears to assault him, and force admittance, and nothing but actual violence could drive them back to their canoes.

The same afternoon the captain, with several gentlemen, went in the pinnace to the other side of the Bay, where they met several Indians, who were employed in fishing. They had several baskets in their canoes, which we examined; and, to our great surprize, found in them several limbs, and other parts of human bodies, which had been roasted, and of which it was evident they had lately eaten by the marks of their teeth, which we discovered in the flesh, and which appeared to have been recently gnawed and torn. We had been before assured, that the inhabitants of new Zealand were cannibals from their own concurrent testimonies in many different places, but had never ocular demonstration of the fact until this time.

When we enquired of these people, how this human flesh came into their possession, they told us that five or six days before a canoe, containing ten men, with two women, had been driven into their bay from a different district, and that they had attacked and kill them all, excepting one woman, who, in attempting to swim, had been drowned; and that their bodies were afterwards divided among them, of which the flesh we had seen was a part. Perhaps they thought, like a celebrated philosopher, that it was as well to feed on the bodies of their enemies, (for by their own accounts they eat no other) as to leave them to be devoured by crows. It is however certain they had no belief of any turpitude in this practice, because they were not ashamed of it; but, on the contrary, when we took up an arm for examination, they imagined us to be desirous of the same kind of food, and with great good-nature promised that they would the next day spare a human head ready roasted, if we would come or send to fetch it. Some gentlemen, who never left their own homes, have ventured, on the strength of speculative reasoning, to question the veracity of those travellers who have published accounts of cannibals in Africa and America; treating as falsehoods every relation, which, from their ignorance of human nature, appears to them improbable: but let them no indulge the same freedom on this occasion; the fact will be too well attested to be rendered doubtful by their visionary impertinent objections.

While we were conversing with our cannibals, we observed something on shore roasting after the manner practised by the inhabitants of George's Island, which they told us was a young dog; but suspecting it to be human flesh, we were going to open the oven, when we saw the hair and entrails of a dog, which satisfied us concerning the truth of their account.

Wednesday [1/17], having finished careening our ship, we began to wood and water; but in going to that part of the bay where we had discovered the baskets of human flesh, we found the body of a woman floating on the water, which we supposed to be the same that had been drowned in attempting to escape by swimming, as before related; but she was soon after claimed by an Indian, who told us she was his sister, and having died had been sunk in the sea, according too the custom of their tribe; a custom which, however, is peculiar to the inhabitants of this bay. In this part of New Zealand we saw many towns, whose inhabitants had either fled or been exterminated; some of them appeared to have been deserted or uninhabited four or five years, being overgrown with shrubs and high grass. On a small island, lying S.E. from the place where we anchored, was one of these deserted towns, most agreeably situated, and consisting of about eighteen houses, placed in a circular form; it was surrounded and defended by a wall curiously constructed, by driving two rows of long stakes or spars into the ground, at convenient distances, and afterwards filling the intermediate space with what we called broom-stuff, being a small kind of brush, made into bundles like faggots, and placed on end, in double rows, supported by others lying parallel with the ground: in this manner the wall is raised six or seven feet in height, and, notwithstanding the simplicity of its structure, it is not easily broken or destroyed, especially when guarded by men, who fight not only to preserve freedom and property, but their own bodies from being cruelly butchered and eaten.

Cook finds a castle and makes a suggestion to the Indians, which they do not accept

At a little distance from this town we saw the remains of a more regular fortification, situated on a high hill, near a pleasant bay. The hill itself was almost inaccessible, and on its top was a level flat, large enough for a town, which was surrounded by a fence made from spars two feet in circumference, drove deep into the earth, and about twenty feet in height: these were placed in contact with each other, and without them was a ditch about ten fee in breadth: within the fence were several large reservoirs for water, and stages adjoining to the spars for supporting those who were placed to guard the town, which appeared to have been spacious enough to contain two or three hundred houses, though none were then remaining. The sides of the hill in every part were so steep, that nobody could ascend them, except by crawling on his hands and knees.

At the bottom of this hill we observed the ruins of a town, which had belonged to the proprietors of this castle, and which was the place of their common residence; for, besides their town, the natives have always a separate fort or strong hold, which serves them for a place of retreat, and a magazine for securing their dried fish, fern root, and other provisions; and, to prevent its being taken by surprize, they always leave a sufficient number of armed men therein, and thither they all retreat upon an alarm; always keeping in readiness a sufficient quantity of water in reservoirs, and regular piles of spears and stones dispersed along the stage adjoining to the fence; the height of these stages being fitted to afford those on guard sufficient shelter behind the fence, and so much elevation, as not to be impeded by it in flinging their stones or using their spears, &c.

Some of these castles, which have not the advantages of an elevated situation, to supply those defects are surrounded by two or three wide ditches, with a draw-bridge, which, though simple in its structure, is capable of answering every purpose: and within these ditches is a fence, made from spars fixed in the earth after the manner of that which was last described, but with this difference, that they incline inwardly; a circumstance which we thought favourable to the besiegers; but, on communicating this opinion to one of their chiefs, he assured us of the contrary; observing, that if the spars should be pointed or inclined outwardly toward the enemy, tat inclination would afford the assailants an opportunity of sheltering themselves under their points, from which it might be impossible to dislodge them; and that they would there be able to dig subterraneous passages into the castle. The same chief told us that these strong holds were never taken, unless by surprize; or when the enemy, being masters of the field, converted the siege into a blockade, and depriving them of all external subsistence, occasioned a famine within; and when this happens, the besieged, having no hope of foreign aid, all their friends and countrymen being shut up in the same castle, are compelled either to perish with hunger, or sally out and meet the spears of their enemies. And hence a decisive victory or conquest occasions the entire depopulation of that district, which was inhabited by the vanquished; all those who were killed or taken prisoners being devoured by their enemies. I would however hope, for the honour of mankind, that this savage practice has been produced among them only from the grossest depravation of human nature; for in its primitive state I should be sorry to believe it would feel no repugnance at a meal, which brutes will not make on the bodies of their own species.