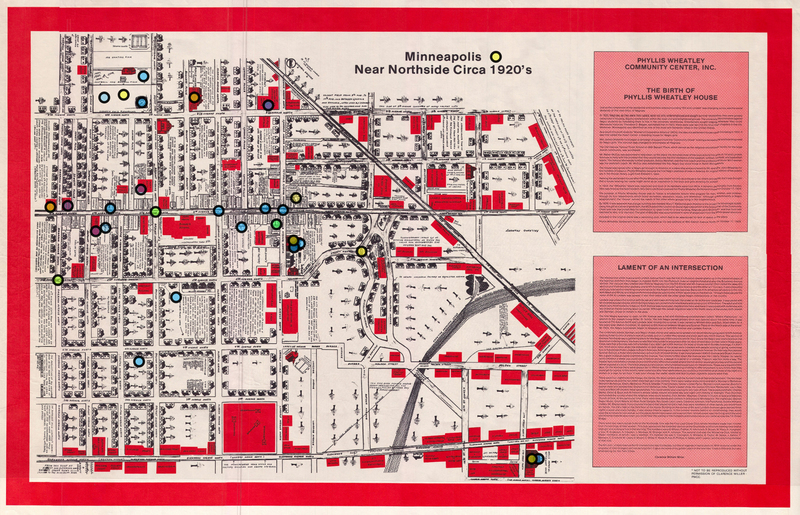 This map, created by Clarence Miller in partnership with the Phyllis Wheatley Community Center, is part of the collection of the Upper Midwest Jewish Archives at the University of Minnesota. The map illustrates an area of North Minneapolis, where many Jewish immigrant families lived, as it was during the 1920s. In this project we are attempting to pin information found online – from photos to oral histories – to locations illustrated on the map in order to better understand a neighborhood that has passed into memory.

Beginning in the 1880s, Minnesota saw an influx of Jewish immigrants from Eastern Europe come to settle in the growing Twin Cities. Between 1880 and 1900 the Jewish population of Minneapolis alone grew from around 500 to nearly 4,000. Many of these new Jewish immigrants came to settle on the North Side of Minneapolis, one of the few areas where incoming minorities could rent in a city still immersed in flagrant discriminatory housing practices. Jewish families flocked to the area that also saw a notable African American population, although the numbers of African American families didn’t truly begin to swell after World War II. And while the two minority populations resided side by side in the area, each group had their own cultural and social organizations independent from one other—the Phyllis Wheatley Center for African Americans, the Emmanuel Cohen Center for Jews, and so on.

As the incoming Jewish immigrants settled into the North Side, their story dovetailed with many other immigrants in cities around America – families thrived as the peddler in the old country instead opened a general store, the junk collector began a scrap metal business, and a network of educational, cultural, and religious institutions were established to assist and serve the needs of their community.

Over time, the North Side changed as generations grew and immigrants became more established in their new country. Until the early 1920s, Near Northside was the commercial center, with Sixth Avenue North (today Olson Memorial Highway) and Lyndale Avenue (today East Lyndale) as the hub for businesses that included delicatessens, furniture stores, fish markets, drugstores and pool halls, along with schools and synagogues. The second generation North Side, which flourished from the 1930s to the 1950s, was centered around Plymouth Avenue. And while the area retained a strong presence of Jewish families, a Minneapolis Jewish Federation study in 1958 found that only 38% of the nearly 23,000 Minnesotan Jews still resided in the North Side – down from 66% in 1937.  As the 1950s and 1960s wore on, more and more Jewish families, businesses, and synagogues left the area for western suburbs, most notably St. Louis Park.

The near Northside Minneapolis neighborhood no longer exists exactly as it is depicted in this map – in 1939 buildings on the north side of the newly created Olson Memorial Highway were demolished to make way for the Sumner Field Public Housing Project, and in 1955 the Glenwood Redevelopment Project further razed buildings and homes. While some buildings still stand, such as the Sumner Library and the Phyllis Wheatley Community Center, others are now only found in photographs.

Help us add more to the map: There are plenty of digitized materials online that can be linked to the North Minneapolis map and we would like your help in adding more! Here are a few places to look for further photographs, oral histories, articles, and documents:

Find something? If you have found something online, either from the suggested websites or others, that can be pinned to a location on this map, let us know. Email Assistant Archivist Kate Dietrick at diet0134@umn.edu.

This exhibit presented by the Upper Midwest Jewish Archives.

Adlin's Grocery →
About the map