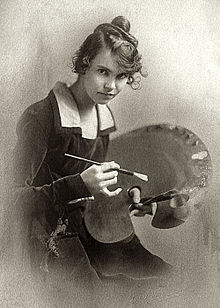 Wanda Gag,  (her last name rhymes with "bog" not "wag") was born in New Ulm, Minnesota, the first of seven children. Her father was an artist and commercial photographer who encouraged his children to be imaginative. As a child, Gag was such an avid drawer that she was nicknamed "Inky". After her father died, she supported her family with her commercial art. She studied at the Saint Paul School of Art and the Minneapolis School of Art, and in 1917 won a scholarship to the Art Students League of New York. In school, she became a master of popular commercial mediums of the time: ink, lithography, and engraving. Her surreal graphic work has contributed to her book Millions of Cats being one of the oldest American picture books still in print. Gag is widely considered to be a pioneer in the development in the picture book form; prior to Millions of Cats, picture books were printed with the text on one side of the page and the illustrations on the other, while Gag intregrated text across a doublepage spread.

Millions of Cats, along with The ABC Bunny were recipients of the Newbery Honor Award. Snow White and the Seven Dwarfs and Nothing at All received the Caldecott Honor Award. Wanda Gag was also a noted printmaker, receiving international recognition as well as numerous awards for her prints in the 1920s and 1930s. In 1940, a book of edited excerpts from her diaries (covering the years 1908 to 1917) was published as Growing Pains; it received wide acclaim.