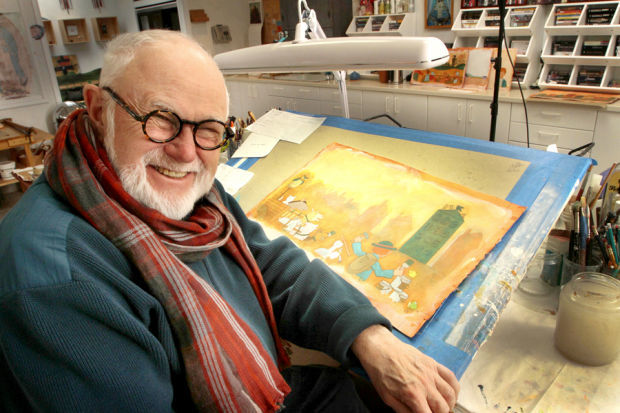 Tomie dePaola was born in Meriden, Connecticut. He was influenced by his mother reading to him and his brother. In first grade, he told his teachers that he was going to make books with pictures. dePaola studied art at the Pratt Institute in Brooklyn, New York, and received his BFA in 1956. He later received an MFA from the California College of Arts and Crafts. Early in his career he worked as a freelance artist, set designer, and college teacher. In 1965 he illustrated Sound and Wheels, two informational books for children by Lisa Miller, and in 1966 published his first book that he wrote and illustrated, The Wonderful Dragon of Timlin. Throughout his long and prolific career, he has illustrated over one hundred books for children, including informational books, realistic picture books, folktales, and other works, written by himself or others.

Strega Nona, An Old Tale, received a Caldecott Honor citation in 1976. dePaola's style reflects pre-Renaissance Italian art, folk style and techniques from film and theater. In 1981 he received the Kerlan Award for his contribution to children's literature. He was awarded the Newbery Honor Award for 26 Fairmount in 2000 and The Laura Ingalls Wilder award in 2011.