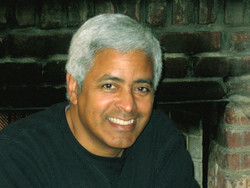 Raúl Colón was born in New York City, after which his parents moved to Puerto Rico, where he grew up and studied art. Colón was inspired by both art and music. He filled his composition notebooks with drawings and had no room for homework. He also read Spiderman and Sgt. Rock comic books along with his older sister's school books. In second grade he read The Legend of Sleepy Hollow. Colón had an interest in movie and TV theme music and as he grew older aspired for being a rock star. To his mother’s delight, he became an illustrator.

In 1978 he moved to Florida and began to design puppets and animate films. Colón has illustrated over 30 children’s books, ranging from folk stories to nonfiction biographies. Currently, he lives in New York City with his wife, Edith. In 2006, Colón received the Pura Belpré Illustration Award for Doña Flor: A Tall Tale About a Giant Woman with a Great Big Heart and the Pura Belpré Illustration Honors for Portraits of Hispanic America Heroes and My Name is Gabito: The Life of Gabriel García Márquez.