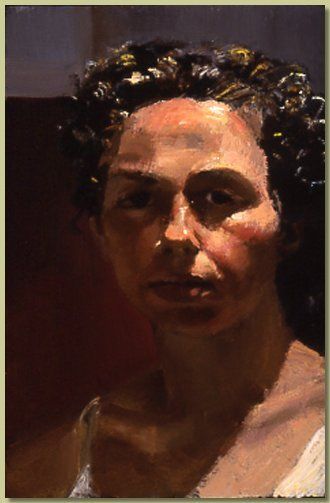 Katy Schneider was born in New York. She recieved a BA from Yale, an MFA from Indiana University, and also attended Skowhegan School of Painting and Sculpture. She has taught art at Smith College. Primarily a fine arts painter focusing on home, family and animals, Katy Schneider turned her techniques towards children's illustration when her friend, the author Patricia Maclachlan, asked her to be an illustrator. Unlike many illustrators, she has worked with minimal drawing, choosing instead to paint directly in oils on masonite panels..She has often painted from photos but does not draw what she paints. In an interview, she said, "My parents got me a paint-by-numbers once when I was little. I was amazed at how the little flat blotches eventually added up to a recognizable image. I was intrigued by the weird smell of it. It seemed so much more sophisticated and exotic than the broken Crayolas and the dried up markers I was used to." Once I Ate a Pie won the Bank Street College of Education's Irma S. and James H. Black Book Award in 2006.