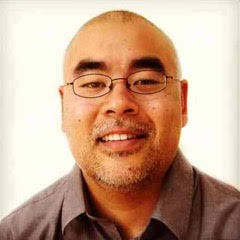 Are We There Yet? (digital)
Dan Santat, illustrator and author
New York: Little Brown Books For Young Readers, 2016
http://www.dantat.com/DANTAT.COM/DAN_SANTAT_author___illustrator.html

Dan Santat was born in Brooklyn, New York to Thai parents who immigrated to the United States. When he was three, the entire family moved to California. Santat's parents wanted him to be a doctor and he originally attended the University of California for a degree in microbiology. After graduation he decided to act on his love of art and enrolled in the Art Center College of Design in Pasadena. He took on jobs in various art industries until reaching the world of children's illustration, where he stayed.

Santat has been known know for his lively, action-packed digital illustration and prolific output. He also created the Disney animated show The Replacements. In 2015 he received the Caldecott Medal for The Adventures of Beekle: An Unimaginary Friend.