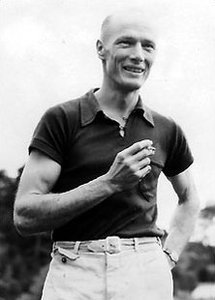 Clement Hurd was born in New York City. In 1939, he married Edith Thatcher, an author. They have a son, John Thatcher, who is an author and illustrator. Hurd received his Ph.D. from Yale in 1930 and then studied in Paris with Fernand Leger, later doing freelance art. Hurd is best known for illustrating Goodnight Moon and The Runaway Bunny, the classic picture books by Margaret Wise Brown. He was in the U. S. Army from 1941-1946. In 1939, William R. Scott published two wordless books, Town and Country-foldout, accordion-style pictures books in which only at the end was a page of suggested story ideas for parents to use.