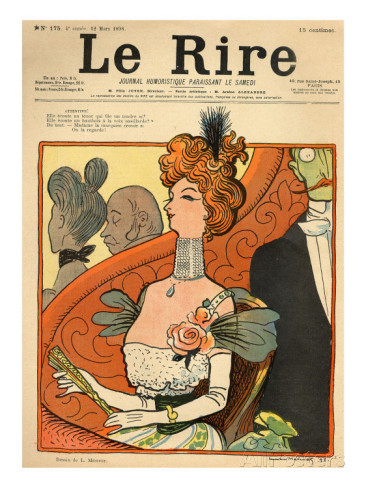 Strict censorship laws were in place during the nineteenth century, particularly on artists who worked for the press.  Not only was the art censored, some artists were even jailed for their offending caricatures (Chenut 440).  Restraints were loosened on July 29 1881 resulting in an explosion of illustrated caricature journals (Wechsler et al. 4), and from 1870-1900 over 139 caricature journals were founded in Paris, followed by another boom between 1900-1914 (4).  Censorship still occurred in direct violation of the 1881 law, regardless, and illustrated journals that featured caricature witnessed censorship such as banned street sales, confiscated issues and  required modification of cartoons (Goldstein 238; 251).

Two of the longest running popular journals featured in this exhibit, “SEM, Gigi, & Caricature”, and that emerged during La Belle Époque, were Le Rire (Laughter) and L’Assiette Au Beurre.  L’Assiette Au Beurre (The Butter Plate) was a weekly illustrated magazine, almost entirely visual, published from 1901-1912.  Prominent artists took on social and political issues and had a presence of nearly 10,000 illustrations over the course of eleven years. (Applebaum introduction).  Le Rire was the most successful humor journal of its time, published weekly in Paris from 1894-1950, with front and back covers and centerfold printed in color.  Aspiring artists who were featured in Le Rire gained renown from their publications in Le Rire. (Eskilson 61).

The illustrated journals, specializing in caricature, of La Belle Époque (The Beautiful Age), that generally dated between 1890 to 1914, took on the aesthetics of the era. The journals featured the luxurious lifestyle of the bourgeoisie with lavish imagery and color (Jullian 4).  Imagery highlighted magnificently rendered horse and carriages, new motorcars, dance halls, and decorative fashion, and celebrity culture.  An almost mythic like representation of the period was represented.