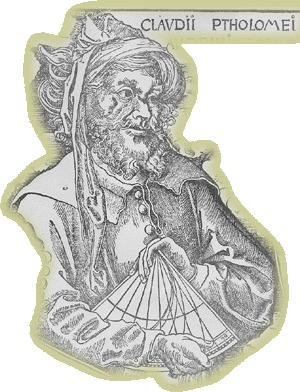 The name Claudius Ptolemy (Klaudios Ptolemaios, 90-168 A.D) is one of the most famous in the history of geography.

What made his work so powerful? In a way, Ptolemy fitted scholars with new glasses, so that they saw the earth as they had never seen it before. Ptolemy’s maps had order, logic, a sense of control in contrast to other fifteenth-century maps. Other maps of their time paled in impact by comparison.

The portolan (or nautical) charts of the time were fashioned for those who traveled by sea. They were usually centered on the Mediterranean and always highlighted coastal features.

The world maps called mappaemundi originated with the church and had religious purposes. These maps often included the location of Paradise or Eden; they commonly depicted mythical animals and people. To the modern viewer, at least, these often appear very complex and confusing, even chaotic.

The diagrams called T-O maps were simple representations of Asia, Africa and Europe surrounded by the Ocean Sea.

None of these had the visual impact of maps made following the instructions of Ptolemy, which brought order to the image of the world. That was Ptolemy’s gift.

[Portrait of Ptolemy reproduced from the Martin Waldseemüller wall map in twelve sheets, with commentary by Carlos Sanz, 1959.]

Biography of the Mapmaker →
About the Exhibit