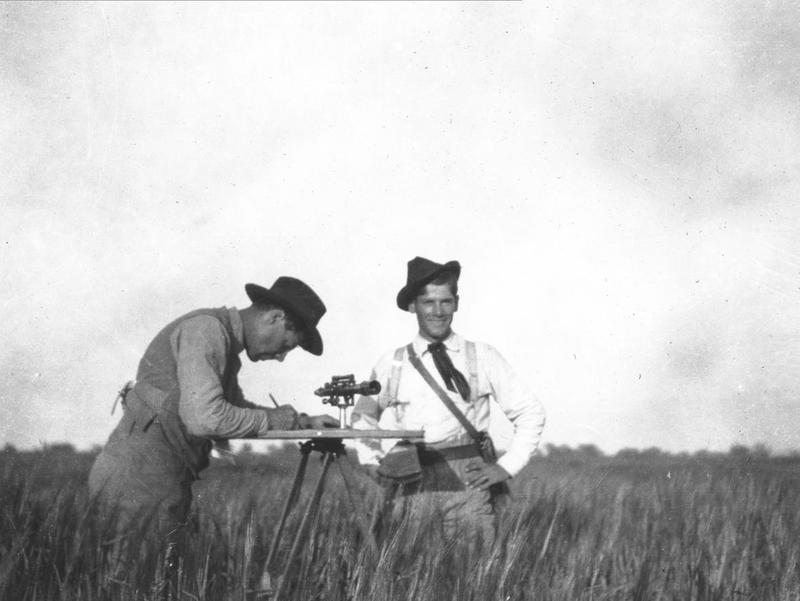 Topographers at work in the field

The art of surveying dates back to ancient times, beginning with the Egyptians and the construction of the pyramids nearly 7000 years ago. In the United States, surveying began after the Revolutionary War and the subsequent Louisiana Purchase in 1803. The American government recognized a need to map the vast amount of unsettled land west of Pennsylvania that had come into the public domain, and thus the public land surveys began.

Surveying is generally defined as the art of measuring the earth’s surface using angles and distances. There are three types of surveying—geodetic surveying determines shape and size of the earth; topographic surveying measures the features of the earth’s surface including hills, valleys, rivers, and lakes as well as cultural features like buildings, railroads, and cemeteries; and cadastral surveying defines property boundaries for land ownership.

The types of tools used for these different classes of surveying are largely the same, even though they have changed as modern mapping technology has taken hold. When out in the field, surveyors usually affixed their tools to a tripod which is what you will see in many historical photographs.

After surveying was completed, various printing methods were used to create a map. The copper plates featured in this exhibit were used to print topographic maps with surveying data for the first half of the 20th century.